​​​Kids for a Better Future (KBF) is a non-profit organization run entirely by and for children, based in New York City.  We're dedicated to helping other children  – considering the privileges we're lucky enough to have, including food, shelter and education, we consider it our responsibility to do our part for kids who don't always have those things.

KBF was founded in 2006 by then 8 year old Akash V. Mehta. Akash and his friends ran KBF for a decade, and raised almost $150,000 for children's rights around the world. In their senior year, Akash and other KBF members mentored a younger generation of activists to take over the organization. Each year we choose a different group of kids to support by raising money and advocating for them.

2017: Coalition for the Homeless—supported the rights and needs of homeless youth and children in NYC. (raised $20,000)
2018: Arab American Family Support Center—supported the rights and needs of Arab youth and children in NYC during a time when immigrants and Muslims are being targeted and discriminated against through hate crimes and incidents, and through discriminatory immigration policies. (raised $7,537 so far)

2019: March For Our Lives -- the movement against guns that was created by, inspired by, and led by the students of Parkland, after the school shooting in Parkland, Florida on Feb 14, 2018. "We will no longer sit and wait for someone else to take action to stop the epidemic of gun violence."

Click here to read about our day with two Parkland survivors, and leaders in March for Our Lives.

Click here to read about our trip to the U.N. with Malala! 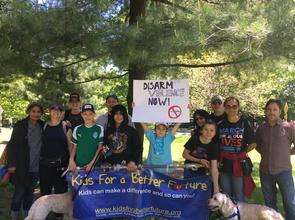 IT ISN'T TOO LATE TO DONATE . 100% OF YOUR DONATIONS WILL GO TO MARCH FOR OUR LIVES. IT'S THE LIVES OF KIDS AT STAKE - PLEASE BE GENEROUS AND HELP US MEET OUR GOAL!!