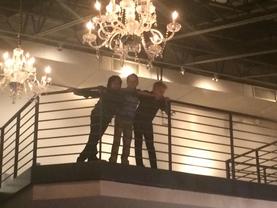 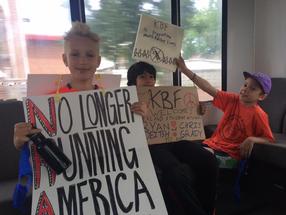 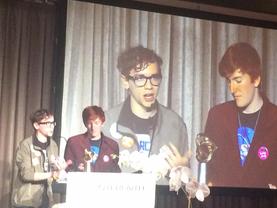 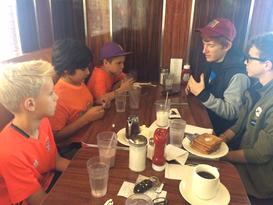 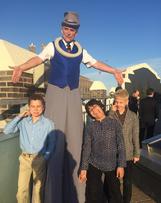 MARCHING FOR OUR LIVES, By Satya Shaw

On June 11th, 2018, three kids from Kids for a Better Future (KBF), Jackson Heller, Grady Belt, and myself, picked up Parkland student activists Ryan Deitsch and Chris Grady from LaGuardia airport. They were in NY to receive an award from Interfaith Center of NY, at their gala. Jackson, Grady and I were also going to the gala that night. KBF is a NY-based kid-run organization that each year supports a different organization which addresses children’s rights. At our last meeting of this school year, we voted unanimously to support March for Our Lives next year. We decided that it is a timely and important issue because of the school shootings that have been taking place, and because this movement for gun control is led by youth.  Gun control is definitely an issue we can put all of our hearts into.

When we got to the airport, Ryan and Chris were already waiting for us because their flight had landed early. Even though we were just meeting for the first time we were given, and we gave, big hugs. Due to construction at the airport, we had to take two shuttles to get back to our car, and we were already deep in conversation before we even got to our car. Ryan and Chris answered all our questions. For example when we asked, “How did you become so amazing at talking in public?”, Ryan said,“If you truly believe in the cause, it just rolls off your tongue. If you mess up it doesn’t matter because you’re speaking from the heart.” The most amazing moment on the shuttle bus was when we asked, “What gives you hope even though something so sad happened at your school?” Chris’s answer was,  “Our hope is you guys — kids who are doing something about guns.” Ryan and Chris said we could reach out to them anytime if we have questions about gun control or KBF’s work in the coming year.

We went for lunch at the Jax Inn Diner near the airport, and told them about all about KBF. They told us that they were going to join the NYC chapter of March for Our Lives at a meeting with Governor Cuomo the next day. Chris told us that he had enlisted in the army before the tragic shooting but literally decided to devote his life to this movement. When we asked what their hobbies were, they said “Well, before the shooting we had regular hobbies like theater, but now this movement is our life.” We congratulated them on graduating high school and asked what college they were going to, they told us they were both taking a gap year and focussing on this movement. We asked what laws or bills they were going to be supporting, and Chris also told us about the ATF, a government Bureau which tracks all the alcohol, tobacco and guns being bought in the country. Apparently, it’s against the law for them to keep computerized records of the guns. All records have to be kept on paper and stored in facilities around the country. Chris told us one of these facilities got flooded and they lost hundreds of records.  Why would a government agency be forced by its own government to use a system so inefficient? Chris said he wants to advocate that this stupid rule be changed.

After lunch, we drove Ryan and Chris to their hotel. On the way, Ryan was on a stressful phone call about the meeting with the Governor, and Chris told us about the tour they were going to do this summer, starting in Chicago and going to California. There would be no parents on the tour. In fact, there are no parents in the movement at all. March for Our Lives has become a non-profit organization with both 501c3 and 501c4 status — 501c3 means they can fundraise and their donations will be tax deductible. And the 501c4 means they can do political work. Then Chris saw the skyline and suddenly he became a kid just like us, and was super excited about being in New York for the first time. He asked us about what they could do in New York and when we went into the Midtown Tunnel, it mesmerized him. We finally got to their hotel and said our goodbyes until the Interfaith Gala that night.

That night at 6:00, Grady and I arrived at the Tribeca Rooftop feeling underdressed even though we had both worn nice shirts. Jackson arrived and we hung out eating hors d’oeuvres until Chris and Ryan found us. Then we took a picture with them and oohed and aahed abut the views, and then it was time to go inside. We had dinner and listened to all the amazing speakers. When Ryan and Chris went up to the stage, Jackson, Grady, and I went onto the balcony to get a better view. Chris talked about how faith played such an important role in the movement. Ryan told everyone that he was struck by all the bus-boys and waiters serving food on the rooftop because just a few months ago, that was him. He was a busboy at a local restaurant and now he’s about to go on a national tour, marching for our lives. I know I can speak for Jackson, and Grady when I say that our day with Ryan and Chris truly inspired us. This, I have to say, was by far my favorite day in my years with KBF.

SUPPORTING MARCH FOR OUR LIVES. 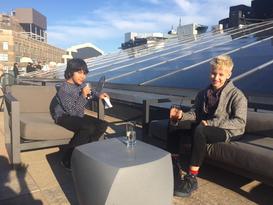 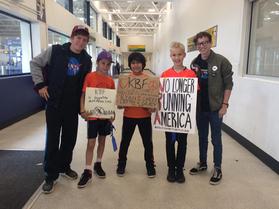 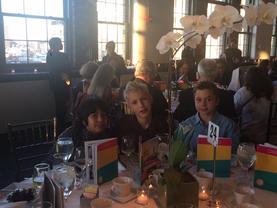 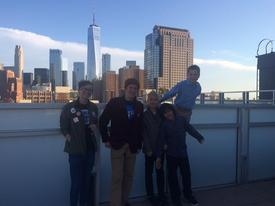 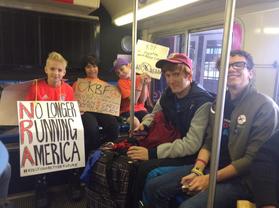